This year Spruce Street Harbor Park will be opening 3 weeks earlier than last year! The hammocks will be back, and in larger numbers, along with additional new seating options and new game spaces that can hold up to 20 people. The spaces will include some of your favorite lawn and board games for you and your friends to enjoy. And, as far as the food and beer goes, Spruce Street Harbor Park has that covered for you with pop-ups from Franklin Fountain, Chickie and Pete’s, The Fat Ham, Federal Donuts, Distrito, and other Garces restaurants.

It’s a leading sign that summer is coming: Spruce Street Harbor Park opens for the season May 7, three weeks earlier than last year.

The popular spot is also adding to its list of awesome features. The super-fun hammocks are back, in greater numbers, and there will be a bunch of new seating options, including Adirondack chairs and picnic tables. Another addition is a waterfront hammock lounge area with two separate seating and game spaces that can hold up to 20 people. Those can be rented for up to two and a half hours.

The park has lots of free, fun lawn and board games, such as shuffleboard, bocce, Connect Four, and giant Jenga and chess sets, plus a boardwalk arcade with skeeball, air hockey, Ms. Pacman, and more. Kids can also splash in fountains all over the space.

This year, there’s also more of what you probably love most about this park: great food and craft beer. Franklin Fountain is back with its nautical outpost, a shipping container outfitted to look like an old-fashioned boat. What’s new this year is the Franklin Sugar Shack, which will feature fruit ices, frozen custard, and drinks made with pressed sugar cane.

Chickie’s and Pete’s is also new, as is top chef Kevin Sbraga. He’s bringing a branch of his University City restaurant, The Fat Ham, to Spruce Street, serving Southern favorites such as pulled pork, brisket, and hot fish sandwiches. Other popular food outlets are back, including Federal Donuts and four floating barges with treats from Distrito and other Garces restaurants.

Of course, there’s more than food. The Art Star Pop-Up Shop is back on Saturdays, and the Punk Rock Flea Market is selling on Sundays. The Oasis, a floating island with a net seating area, is back, too. Paddle Penn’s Landing starts on a weekend schedule May 7, and goes to an every day schedule Memorial Day weekend. After dark, the glittering lights will be on, in concert with other waterfront events.

For complementary fun, the Blue Cross River Rink Summer Fest — the roller-skating version of the wintertime ice rink — opens May 27. This year, the River Rink will have miniature golf in addition to skating.

Spruce Street Harbor Park is on Columbus Blvd at Dock Street and Spruce Street. The park is open Sunday through Thursday from 11 am to 11 pm, and Friday and Saturday from 11 am to 1 am. (Restaurant and bar hours haven’t been announced yet.) Things kick off May 6; the park closes September 25. 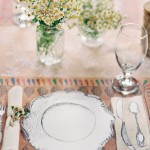 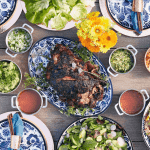 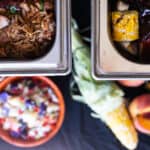 What is a game without a tailgate party!? 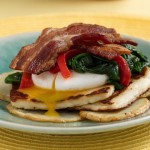 Breakfast Stack with Halloumi, Spinach, Potato, and Roasted Pepper (via Culture, the Word on Cheese) 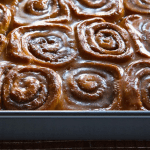